Understanding Different Personalities: The Seven Myths Of Introversion and Extroversion 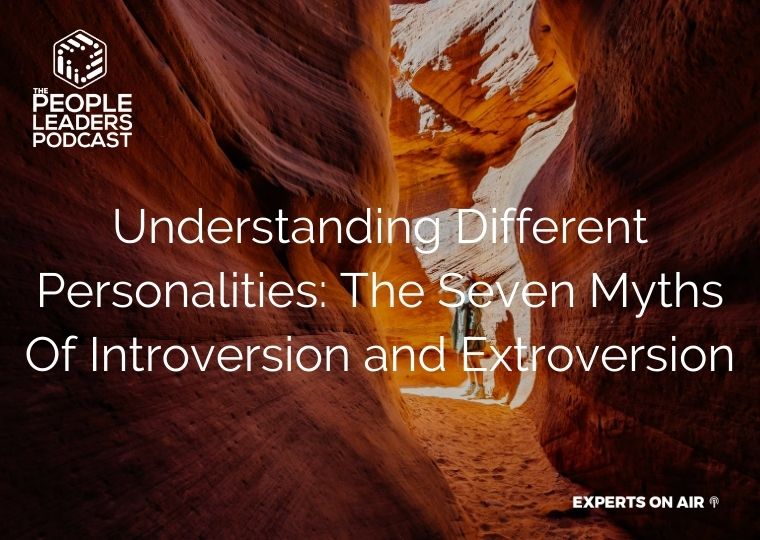 One of the most popular topics we come across as people leader coaches is that of personality types. We’re big lovers of the Myers-Briggs Type Indicator (MBTI) and using it to dissect your own and your team’s personality types. So it’s about looking at introversion versus extroversion and the cross over that naturally happens.

The founders of the Myers-Briggs Type Indicator, Isabelle Myers and Katherine Briggs, say the reason they created it is because they wanted people to have a better understanding of the differences we have in the world.

It’s something that we see play out in our own personal relationships — Michelle is married to an extrovert and I (Jan) am married to an introvert. And we actually use our personal relationships when teaching others because we really do see those differing personality traits come to life; it’s easier to put ourselves in the middle of it all to really understand what drives certain behaviours.

One of the key things to understand though is that everybody has a gift, something they’re good at. It’s your role as a people leader to find that gift. Myers-Briggs Type Indicator is a good opportunity to do that and is another way for leaders, or even parents, to nurture their relationships.

When you really look at the underlying motivation for behaviours, it makes life so much simpler. Knowledge is definitely power. So we’re here to help uncover the seven myths of introversion and extroversion.

And there are some big myths or misconceptions surrounding different personality types. We’ve been doing Myers-Briggs workshops for the past 20 years, and we’ve seen these come out within teams over and over again. But we want to address those myths to help you better understand your team.

The interesting part about this is that we actually get to see extroverts show or demonstrate their happiness. They'll tell you when they're happy and let you know when they're not; they will tell you exactly what they’re feeling more often than introverts.

As a people leader you should use this to your advantage. There’s a gem hiding in this personality type. Since they’re so open to expressing their feelings, they’re more likely to ask for help when they need it, whether that be due to anxiety or illness or not knowing what to do. Whereas people with a preference for introversion tend to hold on to it a little bit more. You really need to dig a little to find out whether they’re okay.

Sometimes, we see introverts spiral a little bit because they tend to analyse everything. Because they’ve got such a rich internal world, there comes a time when there is a little bit of an analysis paralysis. It’s your job as a people leader to really watch out for that and check in to keep them balanced.

This is perhaps one of the biggest misconceptions about introverts. Really, they just socialise in a different way. People with a preference for extroversion will be more comfortable in a louder setting, like a party or somewhere where there is a lot of activity.

For example, we asked introverts and extroverts in one of our workshops, if they had $10,000 to spend on a significant birthday event, what they would want to do with it. An introverted answer might be to have a dinner party with three of their closest friends and put the leftover money in the bank.

So it’s not that they don’t like to socialise but they want to do it on their own terms; it’s not necessarily going to be a big fanfare. Introverts tend to be much more intimate in the way in which they socialise. It’s interesting when you do see people with introversion at dinner parties speaking about topics they love, you can’t tell the difference in personality types because they become so much more animated. That leads us onto the next myth...

The two myths — that introverts don’t like to socialise and are less confident than extroverts — come up time and time again in our workshops. Neither are true.

In reality, extroverts appear more confident because of their behaviour or their body language and the way they carry themselves. They are much more inclined to introduce themselves or to ask a question. They just tend to be more open.

In group settings, they tend to feel more comfortable just talking off the cuff about something, knowing the answer will come through eventually. Whereas, introverts will only share something when they know how to properly articulate it and share it with the world; they want to be 100% sure of what they’re doing.

On the flip side, a lot of people think introverts are so calm and collected when really it just appears that way. And when it comes to body language in meetings, extroverts tend to make lots of eye contact and are comfortable holding a strong posture.

Introverts on the other hand will look down a lot more or away, but it’s not because they don’t want to connect with you, it's simply that they’re thinking about what they’re hearing. So they don’t want any extra sensory input. And in terms of body language they will be more contained, maybe with arms crossed or close to their body. That can often make it seem like there’s an air of calmness around them, so they can be good to have around in crisis situations.

Sometimes extroverts can come across as superficial because they’re good at making small talk. They may ask a lot of common questions to find common ground and find out where they can fit in. They do that out in the open instead of standing back and observing, like introverts tend to do.

This is simply not true. Introverts are not less emotional, they’re just better at bottling it up and hiding it. As we mentioned before, introverts have such a rich internal life, so they’re very self-contained in the way in which they think. So because they don’t express what they’re thinking and feeling as much as extroverts, there’s this misconception that they’re less emotional on the whole.

Where people leaders tend to go wrong though, is by making assumptions about certain behaviours instead of actually checking in with introverts and asking what’s really going on with them. So just be mindful that people with introversion have as much emotional capacity as people with extroversion, they just don’t unload their emotions as they go along.

Networking means being in a room with lots of people, making connections and moving from person to person. This goes back to our previous point that asking lots of questions doesn’t equal superficiality, but extroverts aren’t necessarily better networkers. They just appear to be good at the small talk, which can lead to another conversation or another introduction.

Networking might be about connecting and fostering relationships, but there are lots of other ways to do that. People who have the preference for introversion can be great networkers because they are happier to ask questions and, for a lot of people, they’re favourite topic is themselves.

Introverts can be very good at cornering the market and asking the right questions. Because they focus so much on the actual person or topic, they can dig deep. Extroverts however, might flicker from person to person but only skim the surface because they tend not to have the high emotional intelligence that introverts have.

Myth #7 - Introverts don’t contribute as much

This is a major misconception, especially when it comes to meetings and team gatherings. It’s not that introverts aren’t good contributors, but that they are less likely to share, they tend to hold back until asked. They can give people, particularly in a work environment, the impression that they’re just not contributing at all because there’s an assumption that the only way to really contribute to something is through talking.

Contributing could be done by reflecting, listening, holding the space and being able to be fully present. It’s important to broaden our understanding of the different ways somebody can contribute and not judge them as much for not speaking up in meetings or events. And be mindful of providing the space for introverts to speak up. If extroverts are talking over them, they’re not going to get the opportunity to contribute verbally.

Similarly, people with extraversion tend to stack on other topics or thoughts, which doesn’t give people with introversion the time they want and need to think deeply about each element of the conversation. Be sure to invite the quieter team members to join the conversation too. Ask for their opinion rather than assuming that if they want to say something they will. Or allowing them to go away and think about it before saying something, because that’s usually what introverts prefer.  It’s all about setting people up for success depending on their personality type.

Broaden your understanding of your team members

We know the Myers-Briggs Type Indicator isn’t the answer to everything, but it really is a great tool to use to broaden your level of staff awareness and understand the impact you might be having on other people. If you’re going to work on anything, understanding yourself and your impact will bring you a rich life.

Our hope is that by shedding some light on these myths surrounding introverts and extroverts you will think differently about how you see others and perhaps not jump into judgement as quickly.

We now run virtual Mers-Briggs workshops, too, during this turbulent time. We hope to help people get through this significant change and become better, stronger and more capable and resilient. And the best way to do that is by growing and developing your team.