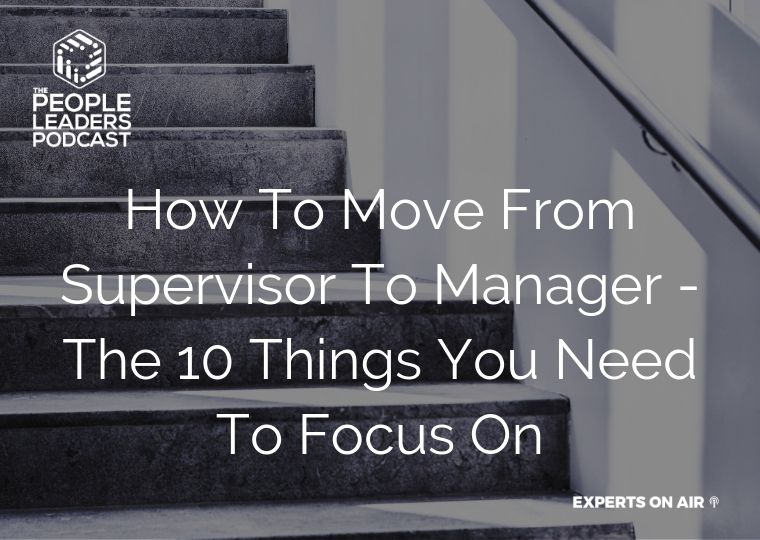 Making the move from supervisor to manager isn’t a simple one. Working the way you used to work just isn't going to cut it anymore.

The three key areas that allow you to be successful in a managerial role are your thoughts and mindset, your behaviours and the tools and strategies you use.

If you’re already a manager but aren’t moving forward, it’s more than likely that it’s because you’re lacking in one of these three areas.

If you can combine each of these three areas and work well in them, it’ll make stepping into a managerial role much easier.More importantly, there

are 10 shifts in mindset you should work on to be successful as a new manager. Let’s take a look at them in more detail...

Successfully moving from supervisor to manager relies heavily on shifting your mindset. You need to broaden your perspective and way of viewing your role.

When I (Michelle) think about the people I've coached over the years who have stepped into a managerial role, one of the key issues I’ve seen is the inability to delegate. Too many people assume their team is too busy to take on more work. But really, anyone who wants to get ahead in their career will be happy to take on extra work.

Being able to delegate will determine, to a large degree, your effectiveness as a manager. The quality of your work will also depend on your ability to properly delegate.

First, ask yourself, ‘Am I prepared to release work if somebody else is willing to take it on?’ That can be a real eye-opener. Then think about what behaviours you need to embody in order to do that.

There will always be low-risk jobs you can hand over. It’s your role as manager to brainstorm which tasks you can hand out and whether there are any particular tasks others in the team might actually enjoy. If in doubt, ask yourself, ‘Is this the best use of my time or could someone else do the job to 80% as well as I could?’

If you can delegate properly, you will multiply your productivity. The sooner in your planning process that you can detect overload, either yours or someone else's, the more effective you'll be in correcting the problem.

Basically, you just can't expect to do everything yourself when you step into a managerial role. You can waste a lot of time trying to master something that you are not very good at. Delegating properly to the right person with the right skills is one of the most important skills you can have as a manager.

In any role, it’s easy to have tunnel vision, just getting the job done from beginning to end. As a manager, your mindset needs to focus on the long view, the big picture, also known as ‘the balcony view’ or ‘the 30,000 foot view’.

One of the ways you can start to develop this is by looking at a piece of work and thinking ahead. Who else will it service? What will they need and what will they use it for? In three months, six months time, is it going to be useful?

So it’s not just about getting in there and doing the work. It's about looking at it from all angles.

A lot of people do like to be told what to do, however, they won’t grow and the team won’t be as effective as it can be. There will be a few times where telling them what to do may be appropriate - when you have a tight timeframe and just need to get things done, for example. But for the most part, you need to learn how to coach and hand over responsibility. It’s about questioning, acknowledging and supporting your team.

A manager’s catchphrase is, ‘What do you need from me?’ It’s good to ask that because you’re handing the responsibility back to your team members. They need to be checking in with themselves and telling you what they need from you in order to get the job done.

Of course, a key attribute of a good manager is being able to take initiative, which requires a different level of thinking from the rest of the team. You might start to ask, ‘How can this work plug into the next person’s piece of work?’ Or, ‘Could I help somebody in another area? Is there something I could volunteer for?’

Start to be aware of particular tasks and activity in your team so you can step forward and be proactive.

Another big problem area for new managers is giving feedback on performance, and receiving it from their team. If you have a high feeling preference or a high thinking preference, you may not take people's values into consideration when you're critiquing them.

The mindset shift needed for this is to be aware of actions and behaviours in your team that you can commend and acknowledge them on as well as actions that need to be tweaked.

Now, when it comes to being a manager, you will naturally have more responsibility. There will be tasks you will always be responsible for and accountable for. You may find you are becoming increasingly accountable for the tasks that the people within your team do. They're responsible, but at the end of the day, you know the buck stops with you.

Now, this is a mindset shift that a lot of managers are trying to move towards but don't quite know how to grasp, because they still feel that they're responsible. It goes back to the actual doing of the task. This is all about having trust in your team, making sure that they have the right skills and resources in order to do their role, and just keeping an overview of what's going on.

You can do that by checking in with them regularly. As we mentioned before, it’s up to them to tell you what they need to get the job done.

Finding the balance between focusing on the task at hand and the people issues within your team is never easy, especially as a new manager. Look at where you’re spending most of your time and ask for feedback from your team.

8 - Being part of the bigger team

Similarly, it’s easy to blame other teams in your organisation when things don’t go right. Many managers fall into the trap of looking at things as ‘us’ versus ‘them’, when you’re all working for the same broader team or the same organisation.

You need to find a balance between seeing yourself as responsible for your team and its actions and seeing yourself and your team as part of the bigger picture. You should always have the aims of the organisation in the back of your mind. And you should clearly communicate that to your team so they understand the impact of what they're doing, day in, day out.

When you are part of a team, you are a colleague and it is about fellowship and sharing information, et cetera. But when you step into a managerial role It is about questioning and developing people and supporting them.

As a manager, you should have a vision and take risks and sometimes, that means standing alone. It’s important you learn to manage your energy so you don’t get stressed and can lead by example.

Shifting your mindset to being emotionally competent is also important for managing stress. In your new role as a manager, you need this to socialise and to influence others to get the work done.

Being emotionally competent means you are aware of yourself, you know what your triggers are and you know how to deal with them.

We’re always trying to move people into action with our coaching; to do something different and be more effective. Think about where you might need to shift your mindset to perform better as a manager and reflect on your thoughts throughout the day. Then you can move into action and do something about it to make an impact on yourself, your team and your organisation.

If you'd like to uplevel your transition from supervisor to manager, or if you have an up and coming manager in your team that could do with extra leadership support, our new online Leadership Essentials Program could be just the thing. Add your details here to join the early notification list.

We’re always trying to move people into action with our coaching; to do something different and be more effective. Think about where you might need to shift your mindset to perform better as a manager and move into action. #PeopleLeaders #Manager