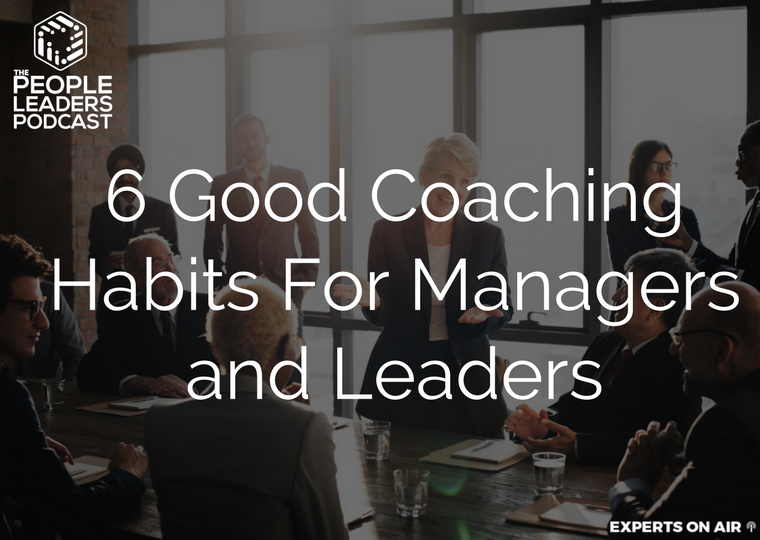 As you move up the leadership chain, your role steadily changes from supervisor to manager to leader. Supervisors are very task oriented and the focus of their work is ensuring that outputs are met in a particular timeframe. Managers and leaders however are more focused on empowering their team members to take responsibility for their own outputs.

In the modern work environment, this requires managers and leaders to be coaches and mentors, usually to their team members but also occasionally to their colleagues as well. Essentially, coaching is about bringing out the best in team members rather than making them work harder or faster.

In this podcast we discussed 6 coaching habits that any manager or leader could and should take on to develop their leadership skills. We’ve also outlined them below.

What coaching is not

Before we define the habits though, a quick word on what coaching is not. Coaching strives to bring about capability lift and to make the coachee function independently of the coach. That being the case, it’s not about giving advice. It’s about coaching the coachee so they can become their own advice giver or to have the resourcefulness to find advice from other resources.

That being the case, the three key skills of the coach are in questioning, listening and acknowledging. We’ll cover these in more detail in another podcast and blog post but, beyond those three, the coachee should be doing most of the talking.

In the meantime, here are the 6 key coaching habits.

We covered feedback in more detail in this podcast episode and this blog post. More specifically, we talked about flipping feedback. Instead of waiting for feedback to come to you from a higher level of management, it’s better to go and seek that feedback yourself. This is an empowering behaviour so take every opportunity to coach your team members to do this.

Most team members will describe issues or problems from their own perspective. That’s human nature to do so but it limits their view of the issues considerably. Almost always, other stakeholders are involved and they will have a different take on the issue, or may not even see an issue at all.

Coach your team members to put themselves in the shoes of others so they can see a broader perspective. In some cases it may be enough to make assumptions about how others see things but, wherever possible, encourage them to ask others what their point of view is. Doing so will equip them to manage the situation more effectively.

Clarity provides context and sets people up for success. It gets you and your team to be really clear and specific about what you want and what you expect.

Expectations change all the time so this is an ongoing process that you will need to do as a manager or leader anyway. The distinction when you have your coaching hat on though is to have the team member repeat the expectations back in their own language.

This should be done in real time and also be set as a follow up action. Have them send you a photo of their hand written notes or an email with a summary of expectations for your review. Nothing too rigid or formal is needed here.

If there’s a misalignment between your expectations and their understanding of your expectations, this gives you an opportunity to nip that in the bud and get the team member back on the same page as you.

Another key point with expectations is to get agreement that they can be met. It’s one thing to understand what the expectations are but if the team member is walking away trying to work out how they can avoid meeting them then the discussion has been a waste of time.

Now that expectations have been defined, ownership of the situation, project or issue can be transformed. Some might say transferred but we prefer transformed. Transformation is empowering (more on that soon).

If a team member has ownership of and accountability for a situation they become responsible to manage that situation themselves. This does not mean you are handing over a task or project and having them implement it ‘your way.’ That’s what supervisors do.

It means delegating with an understanding of the standards that need to be met without the step by step process defined. Those standards may be 80% of the level that you can attain yourself but be willing to accept that if that’s ‘good enough.’ It’s about completion rather than competition.

Empowering someone through coaching as a manager or leader means to step back and let them execute, not just in their own way, but also with their own style. Some may be very matter of fact and work to regular hours. They may not seem very enthusiastic about the work. This is not a problem as such and not the responsibility of manage or leader to fix.

We all have different priorities and values so empower others to express theirs in their own way. As the coach it’s valuable to understand what the coachee values so you can communicate with them on terms they might find empowering but leave them to express those values through their work on their own terms.

6 - Fit the work into the bigger picture

When people understand the value of their work in relation to others it can add meaning and purpose. Coach your team members to find out what impact their work has on the organisation and other stakeholders as a whole.

Someone working in analysis or research, for example, may just see their role as data gathering and number crunching. But if they understand that their research is being used up the line, even at the board level, to make decisions that impact thousands, then their commitment to the work may become deeper.

The best way to form a habit…

Jot them down as prompts on a notepad on your desk then mentally check them off after each conversation so you know you covered them all. Within a month or so they will be habitual and you can move on to develop other key leadership habits.

#Leadership Tip - Remember that every conversation you have with your team members is a coaching conversation.