What Makes A Good People Leader? These Are The Top 3 Skills 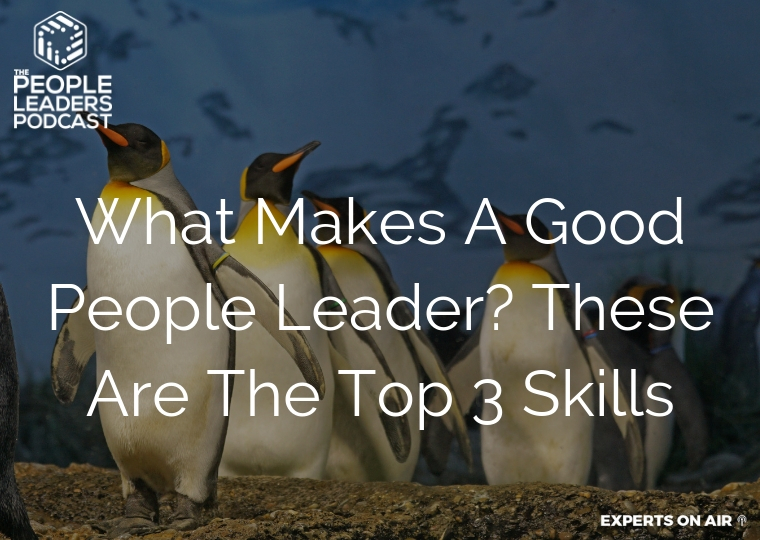 Do you have what it takes to be a good people leader? We’ve thought long and hard about what makes good leadership. We’ve narrowed it down to what we believe are the top three skills based on our experience working with people leaders over the years.

The top three skills are feedback, coaching and delegation. With the changing environment of how we are managing teams now, we absolutely need these skills. Whether you're managing a virtual team or managing a team face-to-face, we believe these are the skills that, if honed, would have the biggest impact when it comes to being a good people leader.

The model we follow when looking at people’s feedback skills is the SBIN model - Situation, Behaviour, Impact, and Next Step. But when we talk about feedback we don’t just mean giving it. It’s just as important to be able to receive feedback as a people leader.

When you're giving feedback, it's so important to define the parameters and the context - the where and when, or the situation you're referring to. If you don't start with that, your team will be lost and confused about the need for the conversation.

The next step is to describe the specific behaviours that you want to address in your conversation. This can be the most challenging part. It’s important to do this in a way that keeps the person engaged so they stay focused and are open to continuing the conversation.

If they’re not engaged, people often jump to conclusions, which completely undermines the feedback you’re giving, so be specific.

Instead of saying something like, “You made a couple of mistakes in the presentation…”, focus on what the mistakes were and why you think that. Did you talk to other people? Did you scan the room?

As a people leader, not all feedback will be negative. It’s good to have a balance. We actually encourage people leaders to mix in some positive feedback every time. For example, you might say, “Yesterday’s sales meeting was great; you started on time and gave everybody the handouts”. Starting with this before moving on to the corrective feedback will ensure your comments or observations are objective.

This is the so-what factor. What impact has the person’s behaviour had on you as a people leader and on the team?

Remember to be specific. Did you feel proud? Or embarrassed? What did the team feel? Again, it doesn’t have to be negative. It might say something like, “Because of the hard work you've been putting into this account, I feel really confident that we're going to get the next sales."

What are the next steps for your colleague and for you?

Maybe you might ask them to keep up the quality of their presentations, or even mentor someone. It’s also a good chance to ask what else you can do to support them to ensure their hard work continues.

If you’re giving corrective feedback, you need to have the courage to be clear about what you want to see more or less of. It’s important you both agree that the behaviour won’t happen again, especially if someone was rude or did something that quite negatively impacts the team.

On the flip side, it’s a good idea to balance out the feedback session. For example, you could ask for feedback from your team, perhaps ask what your behaviour was like in a meeting, and ask what should be done next to improve.

When it comes to coaching, you aren’t telling people what to do; you’re not a teacher, or a mentor, you’re acting as their support.

As a people leader, supporting people that work with you helps them to develop their own skills so they are more effective.

Following the 80/20 - asking your team to come up with most of the solutions - promotes and strengthens that professional performance and personal success and development. It’s all about moving forward by providing training and guidance, learning and support.

The model we use here is the GROW model - Goal, Reality, Options and Wrap Up. It’s used worldwide, and for good reason.

The purpose of starting with goal is, again, to the provide context. If we were having a coaching conversation with someone, I would ask what are the three key issues they would like to discuss that would make it worthwhile.

Many managers think they have to come up with the agenda, but if you give people enough time and hand it over to them, you will get into a good rhythm where they have more control.

Put simply, this refers to analysing the situation. What is working right now? What's not working? How often does this happen?

A lot of time in a coaching session is spent on reality because your reality might be different to someone else’s. The key is to allow someone to have an expanded perspective on the event or the situation because it allows you to be more flexible in your thinking.

It's not a linear conversation, but if you have some structure or focus, you’ll have a more fruitful discussion.

After you’ve laid out the context and analysed the situation, you should look at the options. What is possible with what you've got right now?

For any option that is put forward, it’s a good idea to come up with another one so you cover all corners. Have you thought about everything? What might the consequences be for each option? What’s the criteria for each option - what’s the timeframe?

Now, you should tie everything together and solidify the conversation and relationship. Each coaching conversation should end this way to ensure each person can move into action based on what was discussed.

You might say, “what are our next steps?” Or, “Based on the conversation we had, what are some of the key insights?”, and “What can I do to support you?”

You could get even more definitive by clearly stating the next three steps and the timeframe, but it all depends on the nature of the conversation.

We also encourage people leaders to end the conversation by asking the person to make bullet points of what was discussed and what the agreed next steps are. This ensures a commitment and shows a clear understanding of your coaching.

This last skill might seem odd, but we think delegation has so many benefits, not just for you but for the team too.

One benefit is that it helps your team grow. Delegating tasks based on the skill sets or areas of interest of each employee, will instil trust. This is exactly what delegation translates to - it comes from the Latin meaning to send on a commission; to give someone power.

As a people leader, delegating to your team allows people to step into your position of authority. Just as you are trusting them, you will then earn their trust.

What’s more, by delegating, you’re killing two birds with one stone because you’re making your own pile of work smaller and allowing your team to grow and develop at the same time.

Don’t just pass off the bad tasks, though. Think about what and who you’re delegating it to to give people the best opportunity to learn.

The model we use for delegation is the CROW model - Context, Resources, Outcomes and Wins.

As with any model, setting the context for why you’re delegating is important. You should explain why you’re asking the person to do the work, for example, because of their skills and the fact that you have a tight deadline.

Next, think about what resources might be needed to get the work done. These could be anything from people and applications, to technical support and programmes. The person you’re delegating to won’t know the answer to this, which is why you, as the manager, should take the lead.

hen discussing what you expect the person to deliver, be clear about the standards you want to see. You should also give them an example. It seems basic, but a lot of people assume but don’t actually know.

You don’t have to delegate big jobs. Instead, start small and work up to tasks with more responsibility. For example, you might delegate the running of a meeting or a production report.

This refers to the timing of the task that’s being delegated. When does this report or project need to be delivered? When is the first milestone? When do you want to see the first draft?

Delegating is easier for certain personality types, so it’s a good idea to practise where you can.
We believe if you spend time and energy on improving your ability to give and receive feedback, coaching your team and delegating tasks, you’ll be a much better people leader with a more effective team that continues to grow.